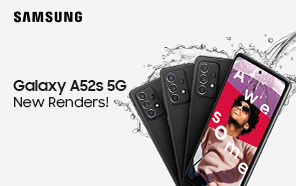 The upcoming Samsung Galaxy A52s has consistently been making headlines for a few weeks — from product certifications to leaked specs — but no images surfaced, until now. A Twitter-based phone leaker published the press renders for the Galaxy A52s 5G yesterday. The renders show the phone in four pastel colorways. 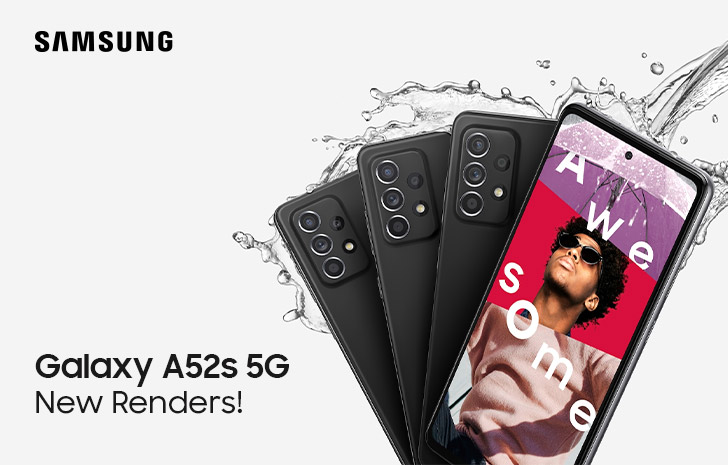 Samsung Galaxy A52s 5G is not a new phone but a mild refresh of the Galaxy A52. Much like the original, the A52s is offered in Awesome Violet, Awesome Black, and Awesome White. But, Samsung switched out the washed-out Awesome Blue with Awesome Mint.

The rest of the build is virtually identical. We’re looking at the same raised camera platform. It’s used to house a quad-camera array, featuring a 64MP OIS-assisted wide lens, a 12MP ultrawide camera, and two 5MP macro and depth sensors.

Flip the Galaxy A52s over to find a 6.5” SuperAMOLED panel that delivers a full HD resolution, 90Hz refresh rate, and 800 nits of peak brightness. A single hole punched through the center of the screen of the Samsung new Model phone 2021 contains a 32 MP front camera. Fingerprint security is handled by an under-display optical scanner.

The IP67 rating against dust/water, NFC, 3.5mm audio port, and stereo speakers are carried over from the Galaxy A52 wholesale. The only upgrade worth noting is the brand new chipset at the heart of Galaxy A52s. Instead of the Snapdragon 750G, the A52s adopts the Qualcomm Snapdragon 778G. It’s powered by a 4500 mAh battery, 25W quick-charging, and 128GB of storage. We’ll have more details when the A52s goes official in the coming weeks.