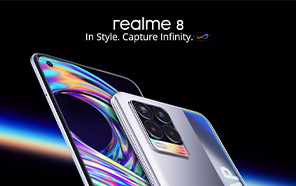 After a drawn-out launch campaign, the long-hyped Realme 8 and Realme 8 Pro were unveiled yesterday. The global rollout of the series is already underway. The two phones are headed to European and Asian markets soon. We’re going to take a look at both. 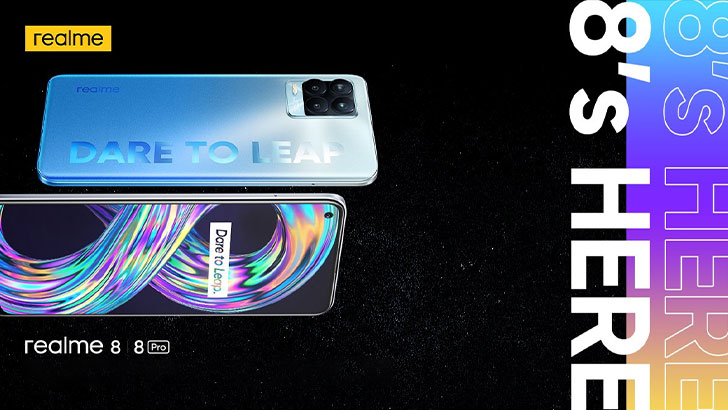 The Realme number series is plateauing. Realme 8 Pro doesn’t aim to one-up its predecessor but become a mild refresh. From the chipset to screen and even fast charging tech, the phone has plenty to recycle. 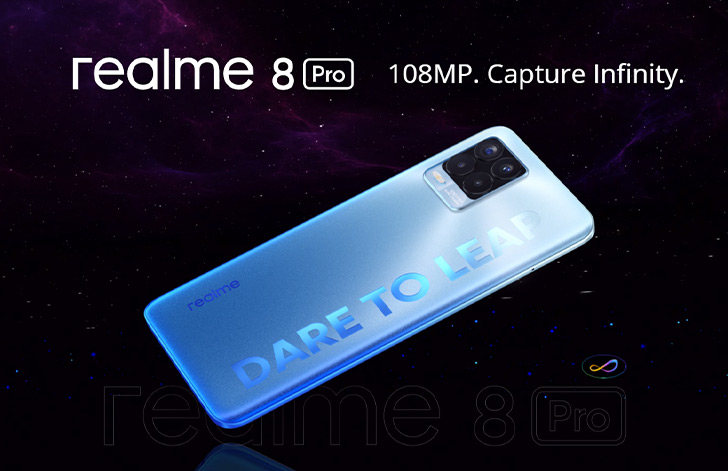 Realme 8 Pro has the same Snapdragon 720G at its heart, powered by 50W DART charge tech. It’s trimmed down from 65W, but Realme still ships the phone with a 65W brick. The 7 Pro is fully recharged in just 34 minutes; the new charging standard takes 47 minutes.

The display is still a 6.4” 1080P SuperAMOLED panel that peaks at 1000 nits of brightness. Realme has punched a hole in the screen’s corner to house a 16MP camera. There’s an optical fingerprint scanner hidden underneath the Realme 8 Pro, but no high refresh or touch sampling rates are available. 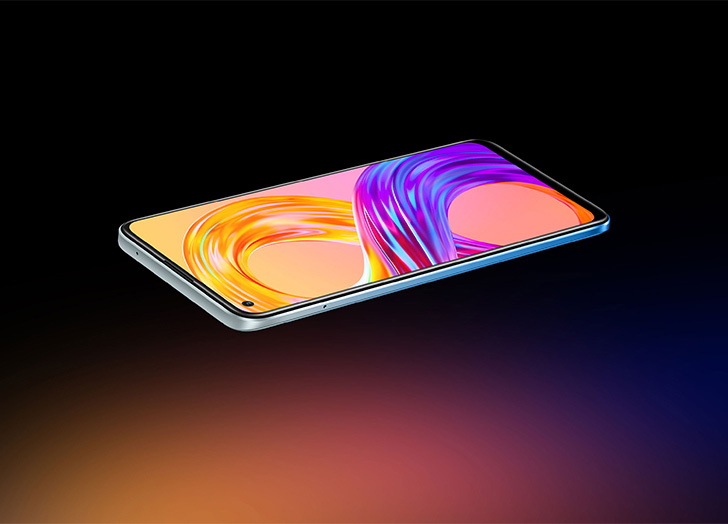 The rear shell takes design cues from the Oppo Reno line. It’s a plastic build that comes in Infinite Black and Infinite Blue finishes. The love-it-or-hate-it ‘Dare to Leap’ branding returns once again. 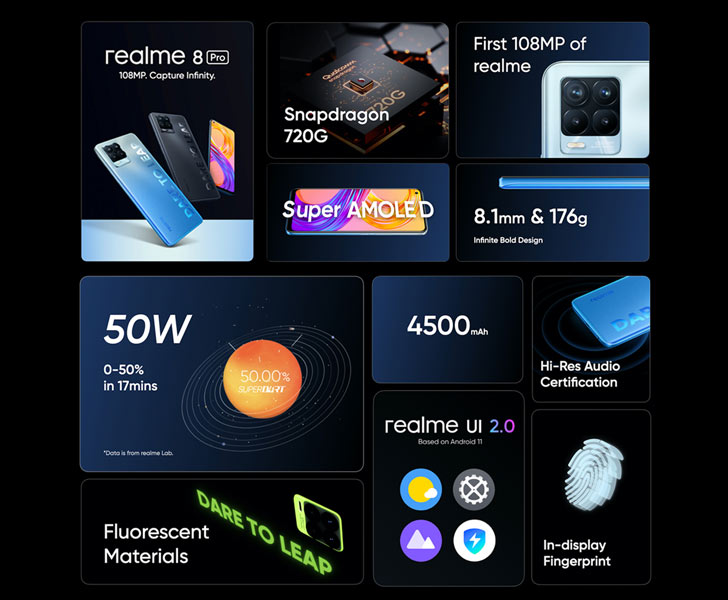 Realme has lined these design elements with a fluorescent material that glows in the dark. At 176g and 8.1mm, it’s not the sleekest or the most lightweight, but the dual speakers onboard are Hi-Res audio certified.

The camera system was unveiled at a separate event. It’s the first in its line to feature a Samsung-made 108MP sensor. Three other lenses complete the setup: 8MP ultra-wide, 2MP macro, and 2MP portrait.

Realme 8 has some upgraded features to offer. It lops off the 90Hz IPS LCD, replacing it with a 60Hz SuperAMOLED panel. This screen also peaks at a 1080P resolution and 1000 nits of peak brightness. Not to mention features the same in-display fingerprint scanner and AOD. 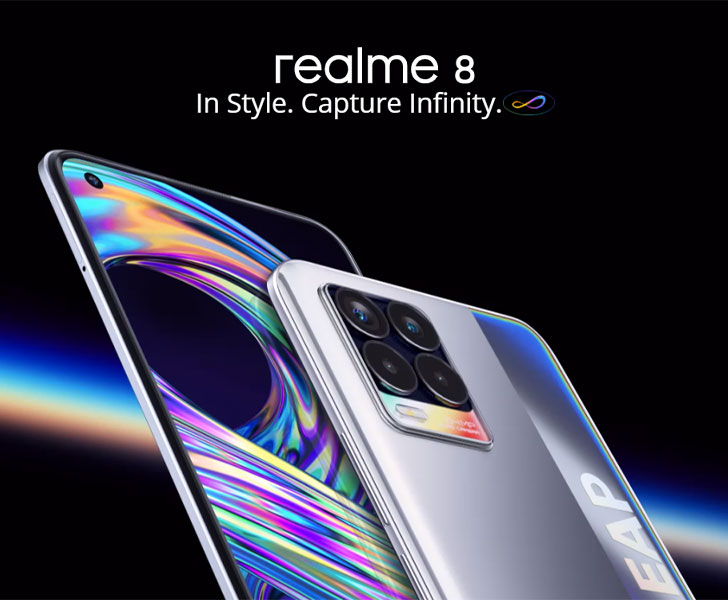 The phone runs on the 12nm MediaTek Helio G95 (inherited from last year’s Realme 7) and a 5000 mAh battery that fast charges over 30W. You get 4GB/6GB/8GB of memory and 128GB of expandable storage. 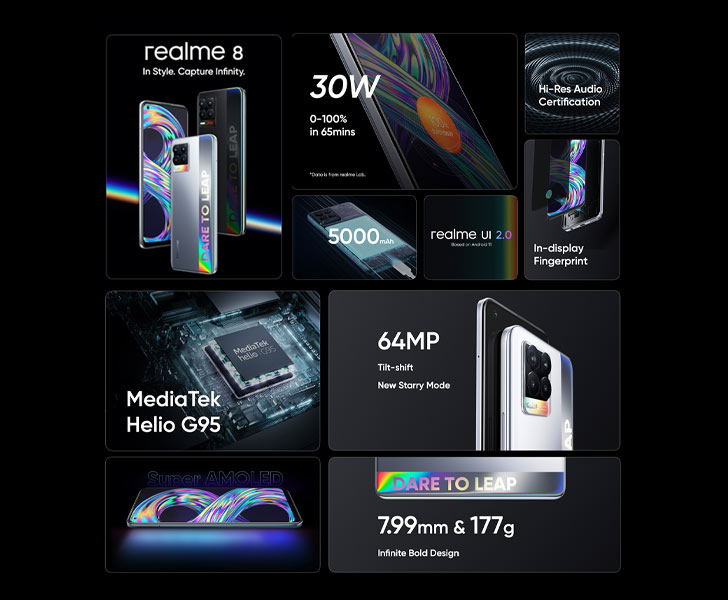 Lastly, we have the design and optics. Realme 8 wears a head-turning ‘cyber’ chrome finish that glimmers in the light. You can pick from Cyber Silver and Cyber Black options, but the layout is roughly borrowed from the Pro edition.

As for the cameras, we’re looking at an array of 64MP wide, 8MP ultra-wide, 2MP macro, and 2MP B&W sensors. The selfie shooter is a 16MP camera.