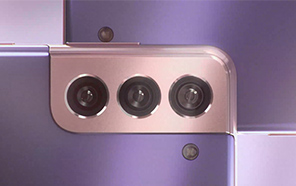 The Galaxy S21 series has been thoroughly leaked over the past few weeks. We’ve seen unofficial product mockups, certifications, hands-on shots, and alleged specification sheets. They leave little to the imagination, but now that the Galaxy Unpacked event on January 14 is nearing, the official promo material has leaked as well.

AndroidPolice published the press teasers for the upcoming launch. The clips showcase and confirm the new design for the Galaxy S21, Galaxy S21+, and the Galaxy S21 Ultra.

The S21+ and S21 share a single design. As seen in the Phantom Violet color in the promo video, their camera islands go around the frame. It’s painted golden, presenting a stark contrast against the bright violet backdrop. The cameras have chrome rings around them — a feature that has become part of Samsung’s new design language.


The bezels have been shaved off further. Not only are they uniform all around, but Samsung has also flattened the displays for both models. Rumors had pointed to the possibility of an under-the-display solution for the front-facing camera. But evidently, we’re stuck with the intrusive O-hole design for another generation.


The S21 Ultra edition is once again going to be a beast. The camera island is bigger than ever. It doesn’t just wrap around the frame but also extends halfway across the width of the phone. No less than five cameras are embedded in this housing.


The rings make the camera cluster look more polished. Reportedly, this combination has a 108MP standard, 10MP 10x periscope, 12MP ultra-wide, and a second telephoto lens, and to top it all off, a laser autofocus module (in light of the 3D ToF fiasco that the S20 Ultra faced).

Samsung isn’t expanding on the color range for the Ultra edition. Much like its predecessor, the S21 Ultra will also come in timeless black and silver colors. It’s also the only model made out of glass in this lineup.