Following the announcement for the ‘Galaxy Unpacked’ event, which the Korean tech giant made the other day, the Samsung Galaxy Note 20 Ultra has once again surfaced in a leak. This time, it’s featured in a hands-on video published by the same source that brought us the live hands-on photographs of the upcoming flagship.

Posted to YouTube by JimmyIsPromo, the minute and a half long clip shows the Galaxy Note 20 Ultra in the same familiar deep black color. Bearing the model number SM-N986U, the Note 20 Ultra runs on the OneUI 2.5 (built on Android10). No mention of the Samsung Prices though.

A quick side-by-side comparison with the Note 10 reveals that Samsung has pushed the Note 20 Ultra's S-pen slot and the speaker grille to the right of the USB port.

The S-pen itself is inherited from the previous-gen Note with a minor tweak — the new stylus also doubles as a digital pointer. The 3.5mm headphone jack has once again been lopped off, however. 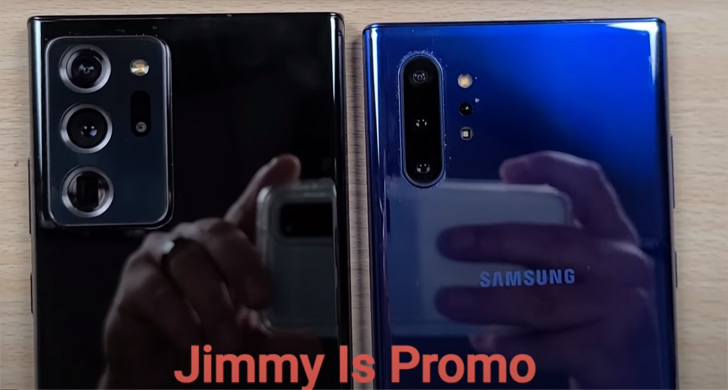 Speaking of the new layout of Samsung Note 20 Ultra, the camera setup is more detailed and oversized, but it still features three cameras. A fourth additional sensor lies flanking the three lenses, suspected to be a laser autofocus module. You can also make out a periscope unit, which reportedly has been downgraded to 50x.

The curved edges are more pronounced, and the shell has a boxier profile. Other than the black edition you see in the video, the Note 20 Ultra will also come in a gorgeous Mystic Bronze shade. The screen design is pretty cookie-cutter for Samsung: an Infinity-O display that wraps around the frame. Qualcomm’s Snapdragon 865 processor, combined with up to 12GB of RAM and 512GB of storage, runs things behind the scenes.