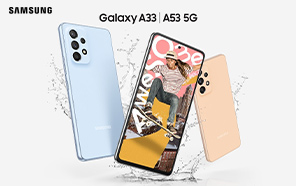 Samsung Galaxy A33, A53, and A73 Officially Unveiled; Stunning Displays and 5G Connectivity

Samsung's latest line of Galaxy A phones dropped on schedule at the Global launch event yesterday. Featuring the Galaxy A33, Galaxy A53, and Galaxy A73, the new series is already available for pre-order in many countries. But it will not hit store shelves until April. 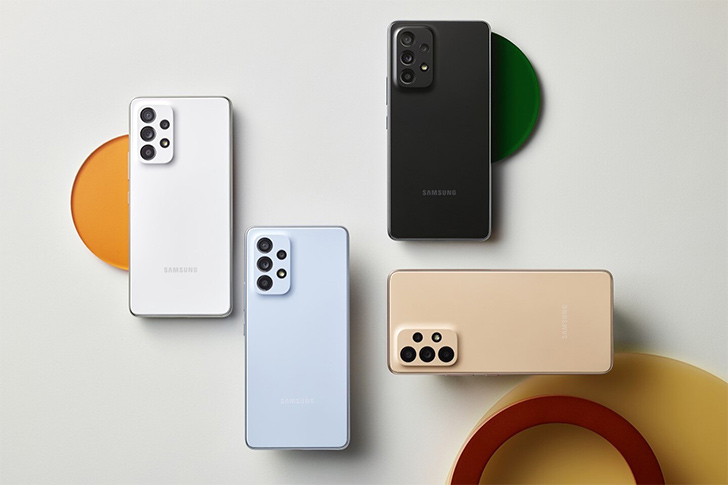 The Galaxy A33 is the cheapest of the three Galaxy phones. It features a 6.4” notched SuperAMOLED screen, peaking at 1080P resolution and 90Hz refresh rate. 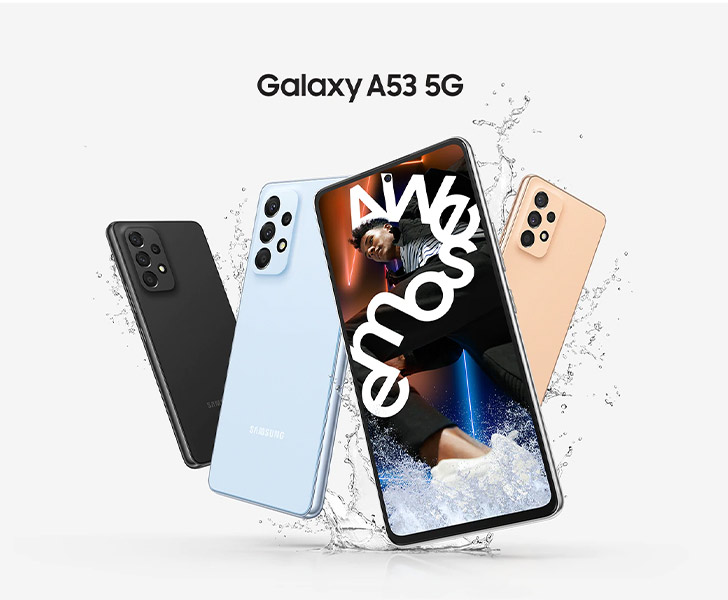 We find a quad-camera cluster on the phone’s back. It rocks a 48MP OIS-assisted primary shooter, an 8MP ultra-wide lens, a 5MP macro camera, and a 2MP portrait camera. The front camera embedded inside the notch is 13MP. 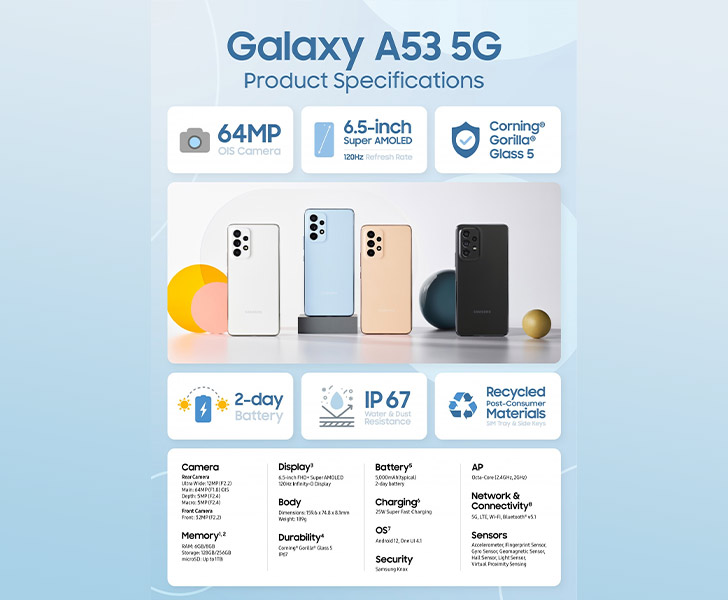 Everything runs on a 5000 mAh battery and 25W Super Fast Charging. Samsung promises two-day battery life out of a single charge. The casing — available in peach, white, blue, and black colors — is toughened with Gorilla Glass 5 and an official IP67 rating against dust and water.

You can pick from 6GB+128GB and 8GB+256GB variants, expandable via microSD storage. A 3.5mm audio jack and a side-facing thumbprint reader are also housed in the frame. But most notably, Samsung is offering flagship-grade software support for all three phones, including the Galaxy A33. It currently boots to Android 12 and will be upgradable all the way to Android 16 (which comes to four years of guaranteed OS updates.)

The Galaxy A53 is identical in design to the Galaxy A33, except for the solitary hole-punch in its display. We’re looking at a 6.5” SuperAMOLED panel, delivering a 1080P resolution and 120Hz refresh rate. Samsung has housed a 32MP front camera and an optical fingerprint scanner in this Infinity-O display. 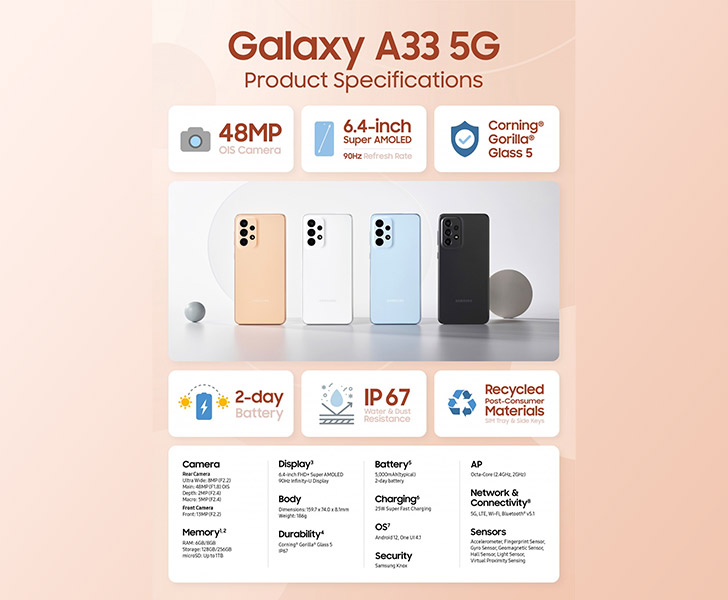 The rear camera array is made of 64 MP OIS-assisted wide, 12MP ultra-wide, and two 5MP sensors. But the battery size, charging power, memory configurations, OS support, colors, and the IP67 protection are all shared with the Samsung Galaxy A33. 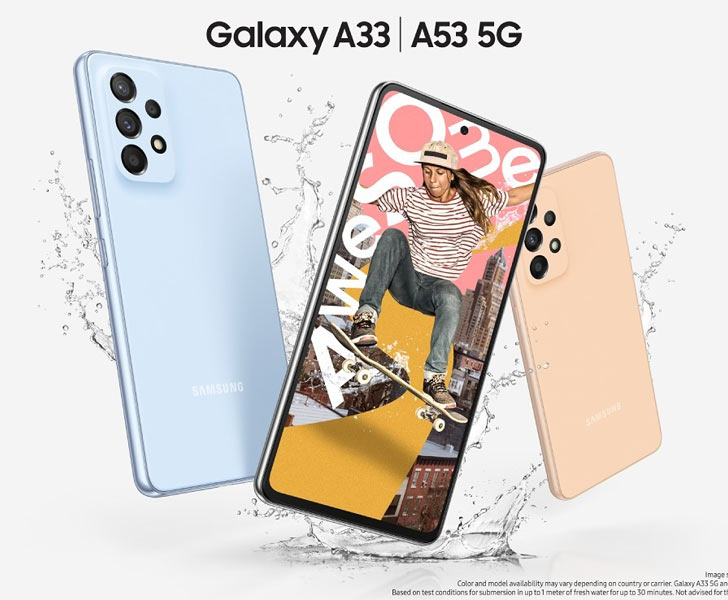 Nothing has yet been revealed officially on the launch timeline in Pakistan but now that the devices are globally announced we expect a release soon.

Note, however, the Galaxy A53 lacks a physical audio port and a charging brick inside the retail box. The phone will go on sale globally from April 1, starting from $450 (~ Rs. 80,000.)

The highest-end of this trio is the Galaxy A73. It features a huge 6.7” SuperAMOLED screen with a 1080P resolution and 120Hz refresh rate. Its chip, battery, charging speed, IP rating, memory/storage, and OS specs are borrowed from the Galaxy A53. 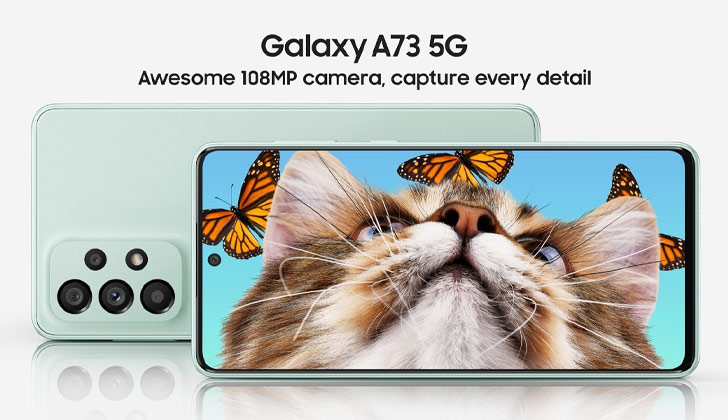 The Galaxy A73 5G comes in gray, mint, and black colorways. We expect the new Galaxy A series to arrive shortly in Pakistan.