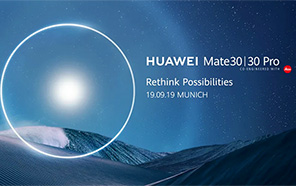 Huawei is all set to unveil Mate 30 series– its latest flagship offering, at a launch event in Munich, Germany today. Though the whole lineup will get globally official today, the handsets are expected to land in Pakistan later on in the coming months.

The live stream is expected to start at 5:00 PM Local time, but before you tune in, make sure you stop by our comments section after the live stream is over, to share your valuable impressions.

As per the leaks which surfaced yesterday, the early renders confirm that the smartphone will be released in 4 different variants, including a limited-edition Porsche design. Other flavors include Huawei Mate 30 Pro, Mate 30, and Mate 30 Lite. Aside from the cosmetics, speculations have pointed both the normal & pro variant to be supporting 5G.

The Mate 30 Pro renders showcase a 6.6-inch water-fall display, featuring a 90 Hz refresh rate. The so-called water-fall design entails an edge-to-edge display with the sides curving to almost right angles. Huawei Mate 30, however, is rumored to come with a regular display featuring minimal bezels and a compact wedge notch. Both these devices will feature a quad-camera set up in a circular housing – which is oddly reminiscent of popular Motorola flagships.

Last but not least, we have the Mate RS Porche – which could well be the highlight of this event. The design comes with a camera strip that covers almost the entire length of the phone with the quad-camera setup sitting at the very top. The rest of the back is covered in what seems to be faux leather available in either red or black.

One caveat though, due to the ongoing conflict with the United States, Huawei isn’t allowed to use any of Google’s products. So these smartphones won’t be shipped with Google Apps or any other Google services.