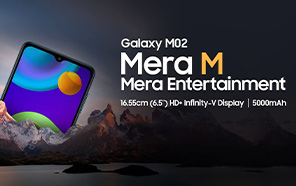 After the Samsung Galaxy A02 quietly launched in Thailand, the Korean manufacturer is all set to unveil the Galaxy M02. According to the official product page on Amazon, the new phone will reach India first, on February 2nd. The teaser also details the display and battery specifications.

Aside from A02, the Samsung Galaxy M02 is the cheapest phone in the brands' catalog. M02 is also listed on Samsung Thailand’s website, so following its launch in India, the phone should arrive in neighboring markets, including Pakistan.

Since the A02s and M02s share most of their specifications, it stands to reason that the Galaxy M02 is a tweaked version of the A02. The new 6.5” notched screen with a 720P resolution and the 5000 mAh battery teased on the Amazon landing page certainly suggests so.

The Samsung M02 would run on the MediaTek MT6739 chip from 2017. It’s based on the obsolete 28nm process, so the performance will take a hit, even for an entry-level phone in the Samsung price list. The USB-C port in the M02s is traded for a micro-USB. Naturally, it lacks fast charging support. The Galaxy M02 charges over 7.5W.

The Samsung Galaxy M02 has a decent enough camera system — a 13MP, f1.9 camera on the back and a 5MP camera on the front. A secondary 2MP macro sensor joins the main rear camera.