Xiaomi is gearing up to introduce the Redmi 9C nationwide, following its global release. As per Xiaomi Pakistan’s social media, the 9C will be available in stores tomorrow at an affordable Xiaomi price, August 12, 6PM. The budget-friendly pick features a refreshing color palette and entry-level internals.

Let’s start with the rear-facing Xiaomi Redmi 9C shell that presents an inconspicuous fingerprint scanner, blending into its ridged, textured surface. Its edges are soft, smooth, and the corners rounded.

A pitch-black camera island with its three lenses and an LED flash laid out in a matrix fashion, resides in the corner. The 9C comes in Midnight Gray, Sunrise Orange, and Twilight Blue editions.

Flip the Redmi 9C over to find a modern, notched display that stretches 6.53” across, delivering an HD+ resolution and a 20:9 aspect ratio — bound in slim bezels. The front camera inside the drop-notch has a modest 5MP sensor. In contrast, the triple-camera mentioned above uses a 13MP primary lens (with a wide f/1.8 aperture), a 2MP macro sensor, and a 2MP depth-assist lens. 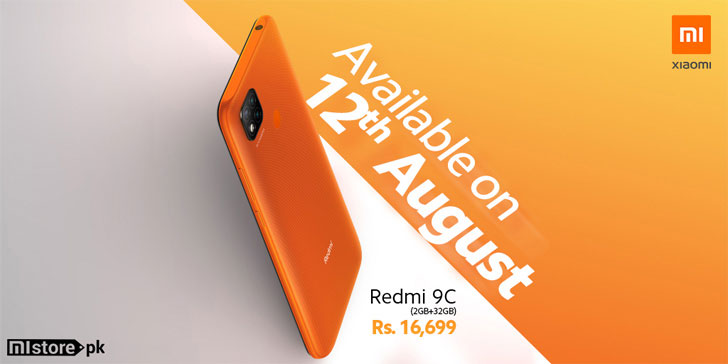 The performance of 9C by Redmi is handled by MediaTek’s budget-minded G35 gaming processor, 2GB/3GB of RAM, and 32GB/64GB of storage — note, however, that only the 2GB + 32GB variant is arriving in Pakistan — and a decent 5,000 mAh battery that charges over a micro-USB 2.0 port.

There’s no support for fast charging as the cell is powered up over the traditional 10W charge, but you can expand the storage further with a microSD card. The official Xiaomi sources confirm that the Redmi 9C starts from Rs. 16,999 and can be pre-ordered online right now.