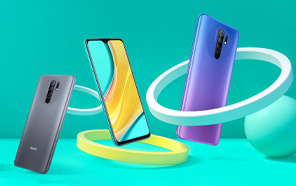 The sequel to last year’s Redmi 8, the Redmi 9 has made its official debut following last week’s announcement and a slew of leaks. This entry-level pick brings company's latest design language to the budget-friendly Xiaomi price bracket -- not to mention that it’s an iterative upgrade over its predecessors.

The Xiaomi Redmi 9 is the first of its family to feature a quad-camera and an FHD+ screen. Its rear-facing panel has a curved, chamfered profile available in Carbon Grey, Sunset Purple, and Ocean Green editions. The shell is plastic and has a subtle texture to it.

And as is typical of Xiaomi, the phone presents a design language with an emphasis on symmetry. The pill-shaped camera island houses three lenses and an inconspicuous fingerprint scanner that blends into the housing.

The fourth camera on Redmi 9 is positioned next to this array, alongside an LED flash. A round, plain silhouette surrounds this layout. The camera setup is underwhelming, to say the least, made of a 13MP primary camera with a tiny f/2.2 aperture, an 8MP ultra-wide camera, a 5MP macro camera, and a 2MP depth assist sensor.

Flip the new Xiaomi over to find a 6.53” notched display that produces an FHD+ resolution on redmi 9, an 89.83% screen-to-body ratio, and 800 nits at peak brightness. The bezels are slim along the edges, but the chin feels heftier than we’d like. To protect it from falls, Redmi has layered the screen with Corning Gorilla Glass 3.

MediaTek’s Helio G80 platform handles processing while promising up to 107% performance improvement over the Redmi 8. The octa-core CPU clocked at 2.0GHz is 80% faster now. It comes in 3GB + 32GB and 4GB + 64GB configurations.

To power itself, the Redmi 9 by Xiaomi has a big 5,020 mAh battery that supports 18W Quick Charge 3.0 technology (however, it ships with a 10W charger). The build charges over USB Type-C includes a 3.5mm headphone jack and support for NFC.