The official press renders for an upcoming Vivo Y-series phone have been leaked online, giving us a peek into the phone’s design and specifications. Vivo Y50 – the model in question, falls squarely into the mid-range bracket. Let’s take a look.

Pictured in the promo poster, you’re looking at a single punch-hole position at the top left corner of what Vivo is calling their ‘Ultra O screen.’ Speculation has it that it’s merely an IPS LCD panel (more on that in a few). 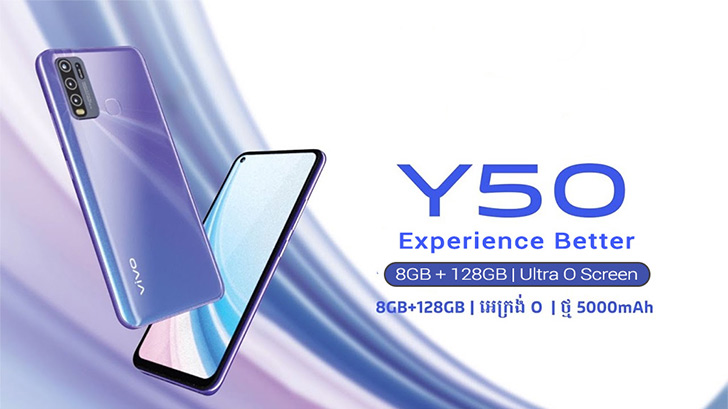 The design is almost bezel-free, and it features a quad-camera system on the back, flanked by a rear-mounted fingerprint scanner. The lack of an in-display fingerprint scanner and the presence of a punch-hole, points to an LCD screen. Note that the Y50 is the first model in the Y-series to debut with a punch-hole camera. Previous leaks point to an FHD+ resolution and a 480ppi pixel density.

The shell is polished and chamfered around the edges. It sports an iridescent-looking purple-to-blue gradient and light streaks that originate from the camera housing. Three of the lenses rest atop an LED flash, with the fourth sensor (perhaps an autofocus module), sitting adjacent to them. The camera bump has a trendy lengthened rectangular shape. 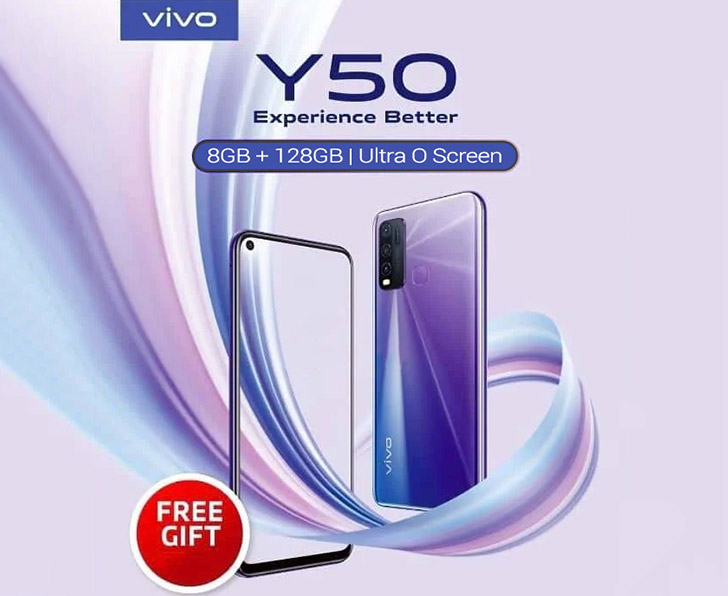 The promo doesn’t confirm it, but credible rumors suggest that a Snapdragon 665 chipset powers the Vivo Y50. The poster does confirm that the SoC will be combined with 8GB RAM + 128GB ROM. A more affordable variant, however, maxes out at 6GB of RAM. A massive 5,000 mAh battery powers the internals, but its fast charging details are not available right now. Vivo will also be offering a gift with every purchase.

We expect the phone to launch in Malaysia, India, and Indonesia soon. The teaser poster doesn’t reveal a launch date, but an online store promises that the pre-orders will start from April 6.