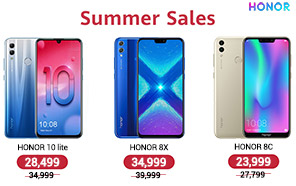 Not to be left behind, Huawei's sub-brand, Honor has also geared up to offer big discounts on its smartphones during Summer Sale which kicked off from yesterday, June 21st. The company is offering a range of discount from 4000 to 7,000 Rs on selected handsets. 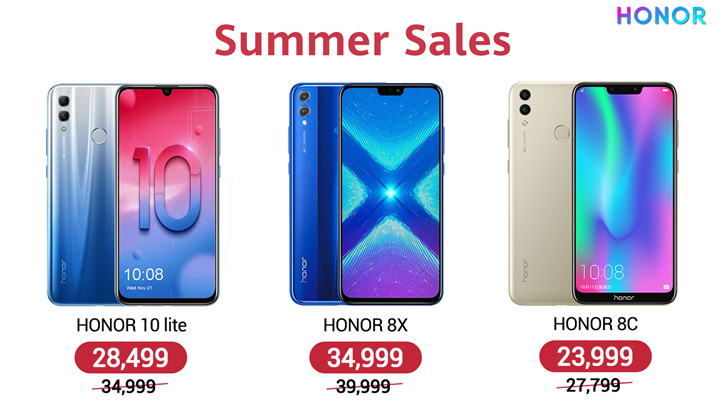 The sale has featured Honor’s top-selling smartphones in Pakistan such as Honor 8c, Honor 8x and Honor 10 lite for the first time. So it's your golden opportunity to go out, grab the deals until these last and spend the summers HONER K SATH!

Honor 8X, a performance monster with a fantastic display is an exact summation of what the Honor brand is all about. Honor 8x smartphone’s 128GB model will be available for Rs 34,999 instead of the old price of 39,999 while the 64GB model is out of stock and won't be selling anymore.

Feel like a Style icon with HONOR 10 Lite. Comes in incredible gradient colors and packs a modern and full of energy design. The device is a great combination of Good looks, a premium screen, high-performance processor and a good camera. The smartphone will be available for just 28,499 rupees in the summer sale while previously it was selling for 34,999 Rs.

Powered by Qualcomm's 14nm Snapdragon 632 SoC, Honor 8c packs a massive 4000mAh battery that will keep you going no matter what. The smartphone was previously selling for Rs 27,799 but now after the summer discount, it is available for just 23,999 rupees.