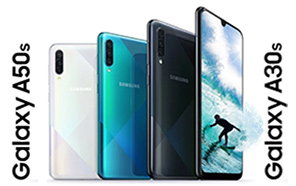 Samsung has officially added two more smartphone models to its portfolio. The Galaxy A50s and Galaxy A30s arrive as updated variants of Samsung Galaxy A30 and A50 released earlier this year. 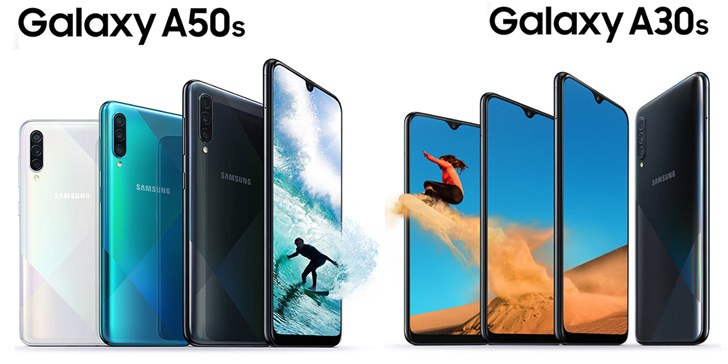 The South Korean manufacturer is expanding the A-series phones with "s" at the end of the model, The new variants arrive as an update over the earlier variants without the letter. The first to arrive had been the Galaxy A10s, just over a week ago. The two new devices were already certified a few days ago.

Both smartphones now also have a new pattern on the back. Samsung calls this unique design  "a geometric pattern and futuristic holographic effect. " In practice, the light from different angles draws geometric figures, showcasing design with variations of shades.

Samsung Galaxy A30, the most modest of the pair, now has a fingerprint reader under the screen. Speaking of the display, the updated version now comes with an Infinity-V notch while the earlier A30 featured an Infinity-U display panel. Also, quite surprisingly the Screen resolution has now been reduced to just HD+ from full high definition which is really disappointing. 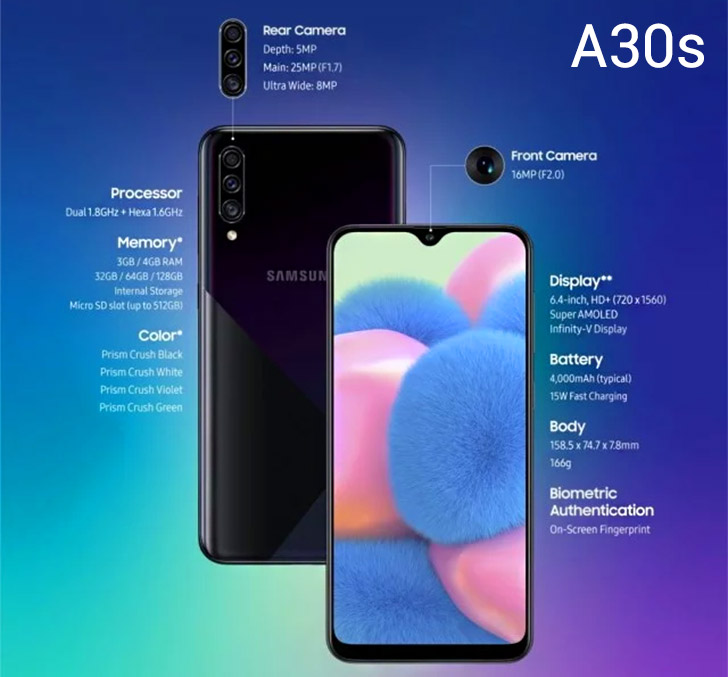 The Galaxy A30s now has a triple rear camera setup instead of dual cameras at the back. The main camera is also updated to 25MP from 16, while the ultra-wide now has an  8MP lens along with another 5 MP depth sensor. Selfie front selfie shooter remains the same at 16 MP.

Apart from the new camera and a redesigned back, the internals of the Galaxy A50s are exactly the same as the predecessor the A50. It features 6.4 inches Super AMOLED Full HD+ display, Exynos 9610 processor, 4/6 GB of RAM and 64/128 GB of internal storage. 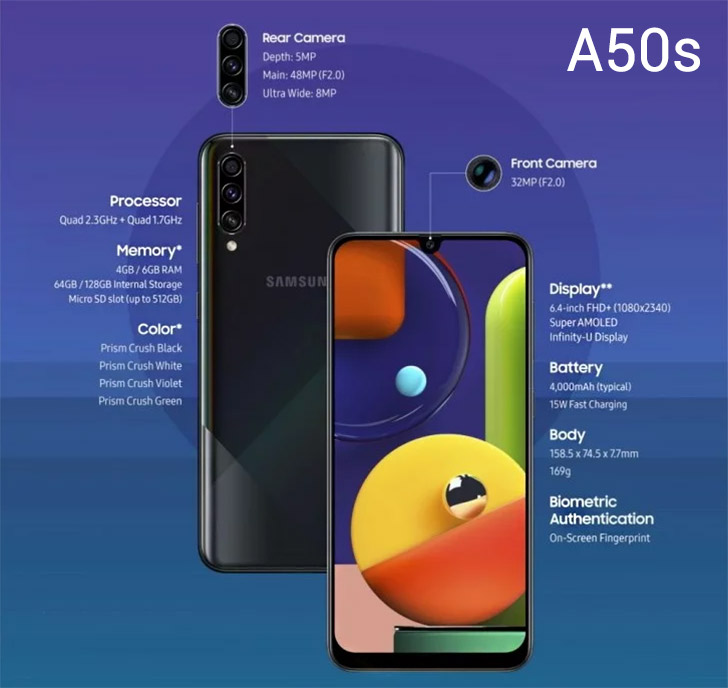 However, Compared to the Samsung Galaxy A50, the A50s improves the rear main sensor from 25MP to now 48 megapixels yet still follows on with the same 8 MP ultra-wide lens and 5 MP depth sensor. Selfies, on the other hand, have also been upgraded from 25 MP to 32 MP.

This device still holds the fingerprint reader under the screen and features a 4,000 mAh battery with fast 15W charging. The Android 9 Pie is the operating system under the One UI interface.

The Galaxy A30s and A50s models will come in four color options: Prism Crush Black, Prism Crush White, Prism Crush Green, and Prism Crush Violet. They are also expected to arrive with the same version of One UI 1.5 interface present on the Galaxy Note 10.

Samsung has not yet announced the release date for both the handset nor any price details were revealed. we'll update you with more as soon as we hear something.