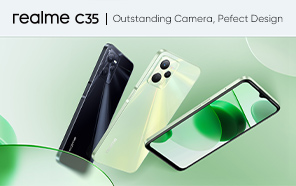 The Realme C35 launched on schedule yesterday. It first dropped in Thailand and will soon roll out to other Asian countries. Realme has revisited the C-series design for the first time since the lineup was introduced. Here are the previews, specs, and pricing.

Let’s start with the most striking upgrade. The Realme C35 now rocks Realme’s latest design language. The frame has trendy flat, sharp edges; the camera housing has a raised three-lens array; a notch bleeds into the display. It now homogenizes with the look of Realme’s other smartphone lines. Not to mention a touch of inspiration from the new iPhone aesthetic. You can pick from reflective lime and black finishes.

The notched screen is a 6.6” IPS LCD that peaks at a competitive 1080P resolution. Until the Realme C35, all C-series phones delivered a modest 720P. It also responds faster thanks to the 180Hz touch sampling rate. The camera in the phone’s notch is 8MP.

Turn the phone over to reveal its 50MP wide-angle shooter. It’s paired with two low-res sensors to pad the count. In addition, we find a side-facing thumbprint reader and a 3.5mm audio jack on the frame at an affordable Realme mobile price. Plus, standard single-firing speakers. 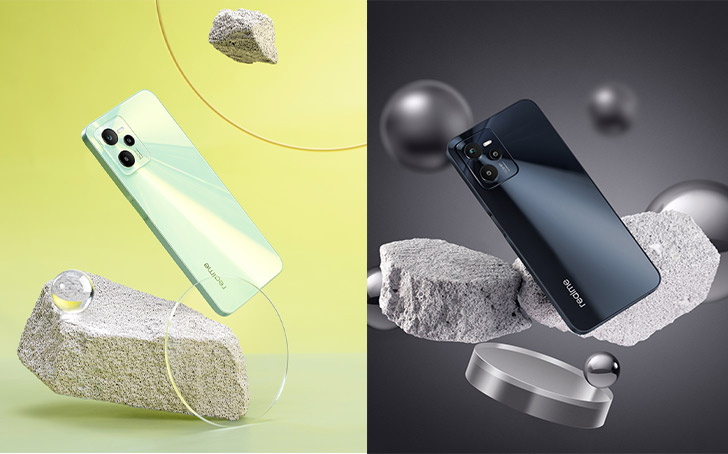 Everything runs on a massive 5000 mAh battery, powered over 18W charging. Realme is switching from MediaTek to Unisoc silicon for this phone. It’s more obscure and less competitive in performance. The Unisoc T616, clocked at a mere 2GHz, handles the number crunching.

You get 64GB of UFS 2.2 storage and 4GB of multitasking memory. You can also pick up the Realme C35 in a 6GB+128GB edition. But both variants allow for microSD storage expansion. Android 11 x realme UI powers the phone. And it starts from ~ PKR 31,000.