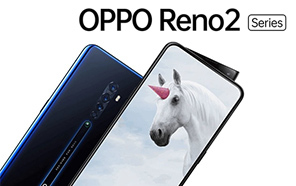 Oppo unveiled the Reno 2 lineup on 28th August this year at a launch event in India. However, a credible report suggests that the upgraded Reno lineup will be hitting the store shelves in Pakistan in the third week of October. Albeit, there is some mystery surrounding as to which of the Reno 2 models will be arriving in Pakistan.

We are, of course, referring to the OPPO Reno 2, Reno 2Z, and Reno 2F. The camera-centric manufacturer combined stunning designs and great displays with quad-camera setups and excellent hardware. All the three Smartphones have few features in common, such as a set of four rear cameras, a 48 MP main sensor and also a notch-free display. Let’s take a closer look.

Kicking things off with Reno 2, you’re looking at an FHD+ 6.5-inch display with a jaw-dropping 93.1 percent screen to body ratio. The build is bezel-less featuring a motorized shark-fin module for the front-facing camera.

Under the hood, a 4,000 mAh battery powers the unit which supports up to 20W wired fast-charging. It runs on a Snapdragon 730G chip accompanied by 8 GB of RAM. And comes with a generous 256 GB ROM coupled with support for up to 256 GB of expandable storage.

OPPO Reno 2Z carries over the same display and memory configuration from Reno 2 with the only major difference in hardware being the MediaTek Helio P90 processor embedded in this model.

It also sports the same quad-camera setup, wielding a 48-megapixel primary shooter, with a 13-megapixel telephoto, an 8-megapixel wide-angle, and a 2-megapixel monochromatic lens. There’s a minor difference of zooming capabilities though. Unlike the 20X digital zoom promised by Reno 2, Reno 2Z packs only a 10X zoom.

Last but not least, we have Reno 2F. Its hardware is comparable to the aforementioned models, with the MediaTek P70 SoC being the only major difference. The optics at back are more or less the same as well, but it ships with a meager 2X zoom and the 16 MP front snapper is fixed in the pop-up module instead of a Sharkfin.

It features a 6.53-inch AMOLED Full HD+ display, 6 or 8 GB of RAM and there is a similar capacity 4,000 mAh battery and the ColorOS 6.1 interface on top of the Android 9 Pie operating system.

All three smartphones are powered by Android Pie (9.0) running atop ColorOS 6.1. The New OPPO Reno series is expected to launch in Pakistan in the third week of October where Reno 2 is expected to retail around 84,999 PKR and the Reno 2Z at 69,000 PKR while Reno 2F will cost around 59,999 Pakistani rupees.