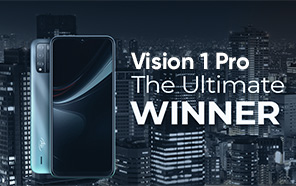 Infinix and Tecno are the two better-known Chinese Transsion Holdings brands, but iTel mobile is another smartphone-maker also owned by Transsion. Not unlike its fellow brands, iTel also makes value phones for African and South Asian markets. And they just launched the Vision 1 Pro 3GB in Pakistan.

The iTel Vision 1 Pro is an entry-level phone that comes in two different memory variants — 2GB+32GB and 3GB+ 32GB. The former had already been retailing nationwide, and the top-end version is now available too.

For its basic price point, iTel Vision 1 Pro offers only the bare-bones, essential features: quad-core SC9832E chip from UNISOC, a lesser-known semiconductor player, low-end 32GB of storage (expandable only up to 64GB), and micro-USB 2.0.

The build of the new addition to the iTel price list is plastic, naturally. We have a single 8MP camera on the back and a 5MP one on the front. Much like the rest of the specification sheet, it’s an unremarkable setup, even though it’s marketed as a “Triple AI Camera.”

A capacitive fingerprint scanner sits right next to the rear camera — always a welcome addition for a starter device. iTel Vision 1 Pro is available in green, blue, and charcoal colorways.

The screen is a standard 6.5” IPS LCD with a 720P resolution and a drop notch. A 4000 mAh battery backs up this hardware, and Android10 GO (the lightweight version of the OS built for low-end phones) powers the Vision 1 Pro.

Lastly, the phone includes a 3.5mm headphone jack and a mono speaker. Vision 1 Pro 3GB starts from a pocket-friendly Rs. 14,499.